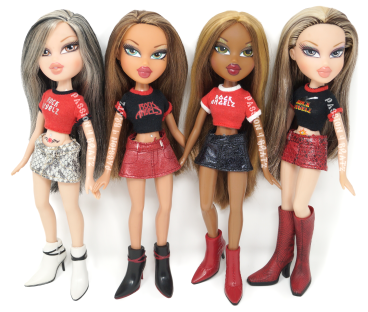 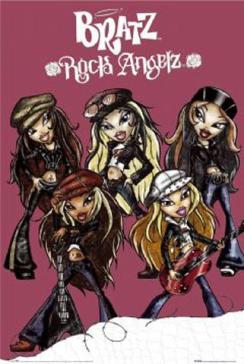 Bratz facts: Rock Angelz was one of the biggest Bratz lines to be released. It featured a total of 6 Bratz, 1 Boyz, and 2 Big Babyz. 4 Micro Bratz Rock Angelz were also released in 2006.  There were 7 playsets that were released for the line, some of which were repackaged with some of the dolls. Jade, Yasmin, Sasha, Cloe, and Roxxi each got 2 Funky Fashion Makeover torsos that had either red or white shirts. Many pieces of merchandise were released to accompany the line, including a movie and video game.

Jade, Yasmin, Sasha, and Cloe each came with 2 outfits, one pair of shoes, a belly button gem, a guitar, a display stand, a microphone and mic stand, tons of accessories, a mini CD with 2 Rock Angelz songs, and a poster. There are very many variants for Jade, Yasmin, Sasha, Cloe, and Roxxi, including box variants, doll variants, and accessory variants. Except for Meygan and Eitan, each Rock Angelz was released with tattoos on their stomachs in extremely limited quantities. So far as I can tell, the tattooed dolls were the first to be released. The dolls were later sold without any tattoos on their stomachs. It’s thought that the reason for this change was because parents thought that the tattoos looked too “provocative”, but there is no confirmation of this. It seems as though it’s only the no-hat versions of the dolls that have tattoos, since the hat versions were released later on in the season.

Jade and Cloe each had 4 box variants, and Yasmin and Sasha had 3. One variant had the dolls with no hats and smaller guitar models. The second variant had the dolls with hats and bigger guitar models. Their no-hat variants are packaged with the clothes either in the upper left corner with a red background behind the doll, or lower right corner with a red to white gradient background behind the doll. Jade and Cloe’s hat variants are also packaged either way. Sasha’s hat variant was sometimes packaged with the guitar from the no-hat variant, instead of her new one.  Roxxi was mainly exclusively sold with the Concert Stage. The stage was either packaged in an open box showing Roxxi and the playset, or a box that only showed Roxxi. However, there was a version of Roxxi that was sold by herself and packaged the same way as Jade, Yasmin, Sasha, and Cloe. This version was a Woolworths exclusive in the UK.

There were 7 playsets in total. There was the Concert Stage that came with Roxxi, the Party Plane, the Tour Bus, the Recording Studio, the Cruiser, the Limousine that came with Jade, and the Band Instrumentz sets. The Band Instrumentz were sold with no dolls, or with either Jade, Yasmin, or Cloe.  Jade, Yasmin, and Cloe were also repackaged in  3-in-1 Rockin’ Fun packs. These packs included the non-hat versions of the dolls in their standard boxes and the 2005 Funky Fashion Furniture Baby Doll playset. These packs were all Target Exclusives.