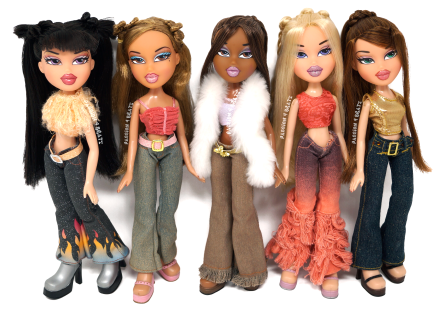 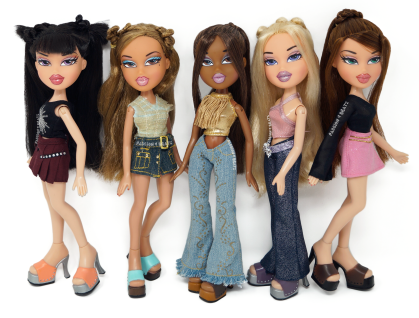 Dolls in this line: Jade, Yasmin, Sasha, Cloe, and Dana
Click on links to see more information and detailed photos of each doll.

Bratz facts: Many of the clothes, shoes, and accessories were reused from Funk ‘N’ Glow Wave 1, though some pieces were unique to just one wave. Dana was featured in the second wave instead of Meygan. Aside from the difference in makeup, one of the biggest differences between waves 1 and 2 is that wave 1 has silver holographic boxes, whereas wave 2 has dark blue holographic boxes. There are a total of 2 known box variants. The line was released in the US, Canada, Europe, and Australia as Funk ‘N’ Glow. The US release was the only one to come with posters and the Toy of the Year sticker. GiG distributed the line as Funky Light in Italy. All boxes are labeled “2003 Fall Limited Edition”.

Each doll comes with 2 complete outfits, 2 pairs of shoes, a light up jacket, and tons of accessories. Dana also came with a hat.  The US release was the only one to come with posters.

​In 2003, the Nighttime Funk Lil’ Bratz line was released. It used many of the same clothing and accessories from Funk ‘N’ Glow (both waves), so it is often seen as a miniature version of the line.