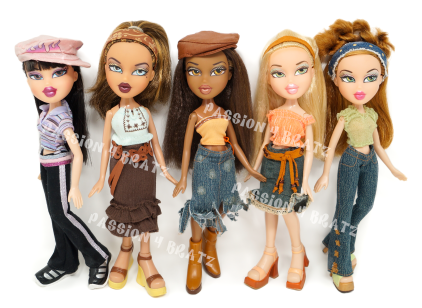 Disclaimer: My Yasmin’s hairstyle came undone years ago and I have not yet found any good reference pictures to redo it accurately.

Dolls in this line: Jade, Yasmin, Sasha, Cloe, and Meygan
Click on links to see more information and detailed photos of each doll.

​Bratz facts: Strut It was the first “basic” line to feature all new face screenings. Like with all of the “basic” lines before it, all 5 Strut It dolls come with 2 full outfits, hair accessories/hats, and bags/purses. Both of Jade’s outfits can be either her first or second outfit. This is because both of her versions are packaged in both outfits, so she doesn’t have an official first or second outfit. Each of the dolls was also re-released with some of the Funky Fashion Furniture playsets or Motorcycle Style motorcycle, either by themselves or with Cade. There are a total of 3 known box variants. The boxes were labeled “The Strut It! Fashion Collection” in the US and came with posters and the Toy of the Year sticker. In Europe and possibly Australia, the line did not have a name, but instead only had the characters’ names and icons on the boxes. Bandai also distributed the line in Europe as Strut It, but these boxes were purple instead of pink like the previous variants. Neither of these variants came with posters. There are also 2 known variant dolls for both Jade and Cloe, as well as variants for Yasmin’s pants and second pair of shoes.

Miniature versions of the clothes and shoes from this line were used for several Lil’ Bratz lines, including the Fashion Tote Wave 2 and Life Style lines. Jade’s skirt was also used with the Lil’ Bratz Fashion Friendz-y Fashion Mall Stylin’ Store add-on.