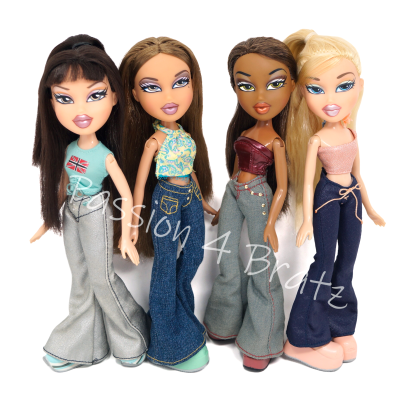 Dolls in this line: Jade, Yasmin, Sasha, and Cloe
Click on links to see more information and detailed photos of each doll.

​Bratz facts: This was the second “basic” line to be released. The dolls all came with 2 full outfits and 2 pairs of shoes. The Flaunt It dolls also came with hair accessories and a bag or purse. 3 of the box variants came with posters.

There are a total of 5 known variants for this line. The first release didn’t have a name, so it is often referred to as Second Edition. All four dolls used the same box colors as their First Edition counterparts. The version released in the US had pink holographic logos and came with posters, whereas the Australian version had solid purple logos and did not come with posters. The Second Edition dolls were also distributed in Europe by Bandai and all had bright yellow boxes. These ones did not come with posters.

​All four dolls in this line use the same face screenings and makeup as their First Edition counterparts, but the hair is shorter. Sasha and Jade also have different hair colors than the First Edition dolls.

​The Second Edition Lil’ Bratz were released in 2002 and featured miniature versions of the dolls and clothes seen in both the First Edition and Second Edition lines.