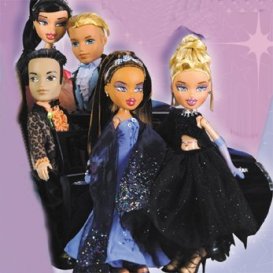 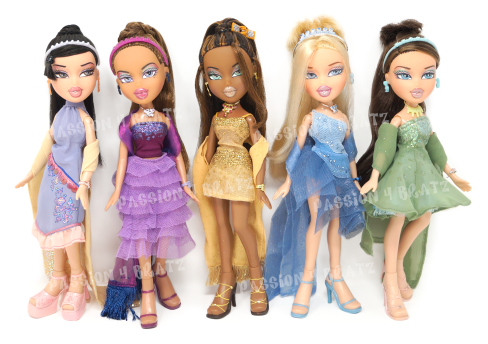 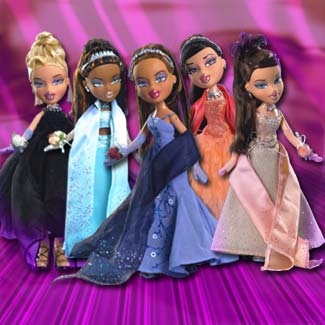 There are a total of 3 known box variants, and only one known accessory variant. Cloe came with a variant purse. The US released had boxes labeled “Limited Edition Prom 2003”. This is the only variant to come with posters and the Toy of the Year sticker. The European Formal Funk boxes were not labeled “Limited Edition Prom 2003”, but they are still limited editions with the same edition sizes as the US boxes. The character names and icons replace the “Limited Edition Prom 2003” label on the front of the boxes. The line was also released as Party Night in Europe and was distributed by Bandai. The boxes are identical to the European Formal Funk boxes, but they say Party Night in place of Formal Funk. The Party Night dolls are still limited edition with the same edition sizes as the Formal Funk doll.s

In 2004 the Lil’ Bratz Dancefloor Funk line was released. It used miniature versions of several clothes, shoes, and accessories for Jade, Yasmin, Sasha, Cloe, and all the Boyz.

Note: All prices will be in USD.  When it comes to buying Bratz, you may not always know where to start. The secondary market can seem pretty overwhelming, and it can be difficult to tell whether or not a doll is priced fairly if you’re not experienced. In an effort to help other collectors navigate…

Hey, Bratz fans! Passion 4 Bratz has finally gone live. I hope everyone is as excited as I am to see this database coming together. It’s been my dream to put together a database since shortly after I started collecting Bratz as an adult. I am proud of the work I’ve done to get this…