Go Back to Second Edition/Flaunt It

Click on images to enlarge.
Disclaimer: Jade’s headband is supposed to have studs across the top and her pants should have studs/buttons on the crotch. Mine came off due to age, so this page will be updated at a future date. 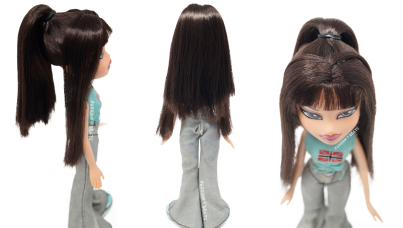 Second Edition/Flaunt It Jade Close Up

​Bratz facts: This Jade is nearly identical to First Edition Jade, however her hair is shorter and dark brown instead of black. Otherwise, she uses the same face screening and makeup.

Second Edition Jade doesn’t come with any extra accessories, whereas Flaunt It Jade comes with a red headband and teal bag. The dolls for both versions are identical.

Second Edition Lil’ Bratz Jade came with miniature versions of some of this Jade’s clothes.