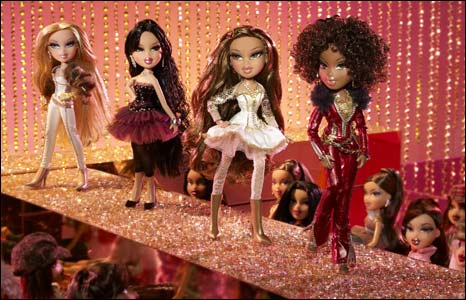 There are 2 known box variants for Jade, Cloe, and Sasha, but no known box variants for Yasmin, Meygan, Dana, Phoebe, and Katia. There are no known variants of any of the dolls themselves, but Sasha has variant perfume bottles. Jade and Cloe were repackaged for discount stores without the perfume bottles, but it is unknown if Yasmin and Sasha were repackaged the same way. Sasha was packaged wearing either her jumpsuit, or her dress. She came with a yellow perfume bottle when she was wearing her jumpsuit, or a red perfume bottle, when she was wearing her jumpsuit. Jade, Yasmin, Sasha, and Cloe’s boxes all had multiple languages on them for the European releases.